What Is An Implied Contract And Why Should You Care?

When we say contract, the first image that comes to your mind is probably a fancy piece of paper with signatures and stamps handed over to you by a lawyer in a suit and tie. 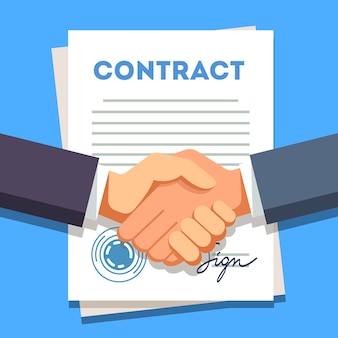 And while that’s not entirely wrong, did you know there are legally binding contracts even if you don’t have them on paper? Even if no lawyer in suit and tie hands it to you?

That’s right. It’s called an implied contract, and we’re here to explain why you should care about it before you contract an implied agreement unintentionally and find yourself cluelessly bound in a legal case.

What Are Implied Contracts? Are They Enforceable Under the Law?

To put it simply, an implied contract is when a mutual agreement ensues between parties even without an express contract or any written agreement.

It’s implemented with the same legal force as that of a written contract, and it’s legally binding as long as you meet the criteria set by the law.

For most matters, an oral agreement is already sufficient to enforce a contract.

There are some exceptions, though, such as immovable properties like land and real estate. For these certain sales cases, a written contract should always back these up.

When Is An Agreement Considered An Implied Contract?

Of course, not every agreement with your friends means you already have a legal contract ongoing and that you can sue each other when one of you breaks a promise.

Keep in mind the context of an implied contract is still within juridical bounds. In short, not every matter constitutes a legally binding contract just because the parties assumed it to be.

What kinds of situations do an unwritten contract become legally binding?

Well, there are a lot. This article would be endless if we discuss them all. So, instead, let’s present certain examples under the different kinds of implied contracts, shall we?

One kind of implied contract is an implied-in-fact contract.

This type of contract means the parties involved formed an agreement through the two parties’ behavior and surrounding circumstances.

They didn’t have to orally set the grounds before they started because the contract is understood as facts even without formally declaring them.

When you eat at a restaurant, you don’t find yourself signing a contract before you’re served the food.

The restaurant owner and servers (as the other parties) are obliged to accommodate you, serve you safe and edible food, and provide a clean and sanitized place.

On the other hand, you (as one party) are obliged to pay for your orders as a customer accordingly.

You both knew by the fact what agreement ensues between you and what you have to do as the two (or more) parties.

The contract existed between the parties as soon as you entered the restaurant.

Example #2: Implied In-Fact Contract Based on Past Conduct of the Parties

You can also claim that an implied-in-fact contract exists based on the parties’ act in the past.

For instance, when you were tasked to wash a car in exchange for monetary compensation. The first transaction went well, and you were paid for the services provided.

The next month, you were asked to wash the car again, but you no longer talked about compensation. You have the right to assume that the party’s action in the past to compensate you is already implied.

You have the right to demand payment on the grounds of an implied-in-fact contract.

But it’s a different story if the other party explicitly stated there will be no compensation this time and if you still accepted the offer. The upper hand, in this case, falls on the other party.

As the term goes, quasi means partially or not really. So you can say that an implied in-law contract is not really a contract, but it’s enforceable under the law as an implied contract.

The most common example is when your neighbor’s house catches fire while they’re on a vacation.

You, as a good neighbor, will assume that your neighbor would’ve wanted you to save their house, so you did in good faith and with a legitimate interest in saving the house.

(We’re emphasizing this since it’s a totally different story if you intentionally set the house on fire then saved it for compensation. That’s illegal, and if proven, it will not be recognized by the law and you’ll be penalized.)

When they come back, they should compensate you for your actions even if you didn’t have an initial agreement from the start that when the house catches on fire, you need to save it.

Suppose you sustained injuries while doing so, they need to pay for your medical bill and medical services.

BUT if you already had a past agreement (can also be oral contracts) about saving the house in case of a fire which includes the terms concerning your medical arrangements, then it’s no longer a quasi-contract but a contract in itself.

Example #2: Emergency in a Public Place

Say a pregnant woman suddenly gave birth on the side of the street. A doctor then came to help and assisted her with everything.

After a few weeks, the doctor sent her a medical bill.

Yes, the woman is obliged to pay the doctor’s services even if she didn’t ask for the doctor’s help. The fact that she didn’t protest against the help implies that the party accepts the service through consent choices, and under the law, she needs to pay fair value.

You might wonder and say that the pregnant woman didn’t have a choice but to accept since it was an emergency, but that’s exactly the point. Should the doctor be absent in the situation, she could’ve been in danger.

If she was in a hospital, she’s expected to pay the doctor without question, right? The implied in-law or implied at-law contracts basically say they should still be the same.

Of course, the doctor can also make it gratuitous – or not bill her for anything anymore, but that’s completely up to their decision.

We understand that the concept of an implied contract is quite confusing since there’s a fine line between their enforceability.

Now that we’ve discussed the more or less important points of an implied contract. we’ll answer some of the FAQs to further clear things up.

Which Is Better? Implied Contracts or Explicit Contracts?

It depends on the situation, but explicit contracts will always have a stronger hold as evidence.

When things go haywire, you have a device (contracts) to return to which will strengthen your ground in court.

But the beauty of implied contracts is that part of its device characteristics (or features) protect you from some unexpected situations. If you contract an implied agreement and you get in trouble, it could help protect your rights.

Under the law, a warranty is when one party secures a guarantee or “vouch” for the object being contracted.

The parties involved have the tacit understanding that the item is merchantable.

For example, when one party sells a car, the implied warranty is that it’s functional, has legal titles, has precise geolocation data, gives a content performance, etc.

We hope we were able to help you have a general idea of what an implied contract is, and help you with your legal understandings.

But remember, nothing beats the legal advice of a law firm for important matters, of course.

Don’t be afraid to seek legal advice especially when needed.

Our last reminder: always be careful with your actions or lack thereof!